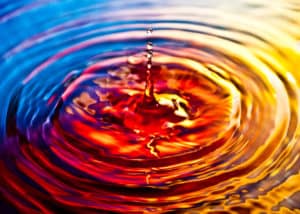 In education, learning about one topic has a ripple effect across all spheres of knowledge.

As advocates of unschooling, we don’t push students to learn specific subjects separately from each other. The underlying assumption in unschooling is that nothing exists in a vacuum, and when you set out to learn one thing you end up learning many different “subjects” along the way. One of our students was learning about Geography and along with studying where in the world things are, she also studied what is happening in those places. Here is what she had to say about what she learned along the way.

“In Geography, one of the topics I covered was global phenomena and it dealt with a variety of things such as
the plight of refugees. This brought to my attention how many refugees there are here and across the world seeking a safe place to live. This made me realize how grateful I am for having a place to call my home. Irrespective of what culture, race, or country we come from, we all want the same things in life like safety, love and acceptance. This made me think that all current affairs around the world have a ripple effect, like throwing a pebble in a pond. If something happens in one country, although it is far away from your own country, you may still be affected by it.” 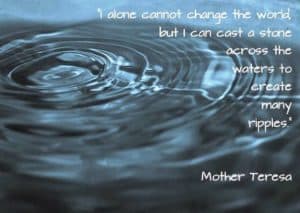 have. She learned so much more than where a country is in the world, or any other bland facts about it. She really delved into what is going on with people in other places. Even when the situations there aren’t very pretty.

She’s had a profound realization of unity in the world. Everywhere in the world, people want the same basic things. Perhaps that realization will also lead to an understanding that what she herself does also has a ripple effect around the world. As Mother Theresa said “I alone cannot change the world, but I can cast a stone across the waters to create many ripples.”