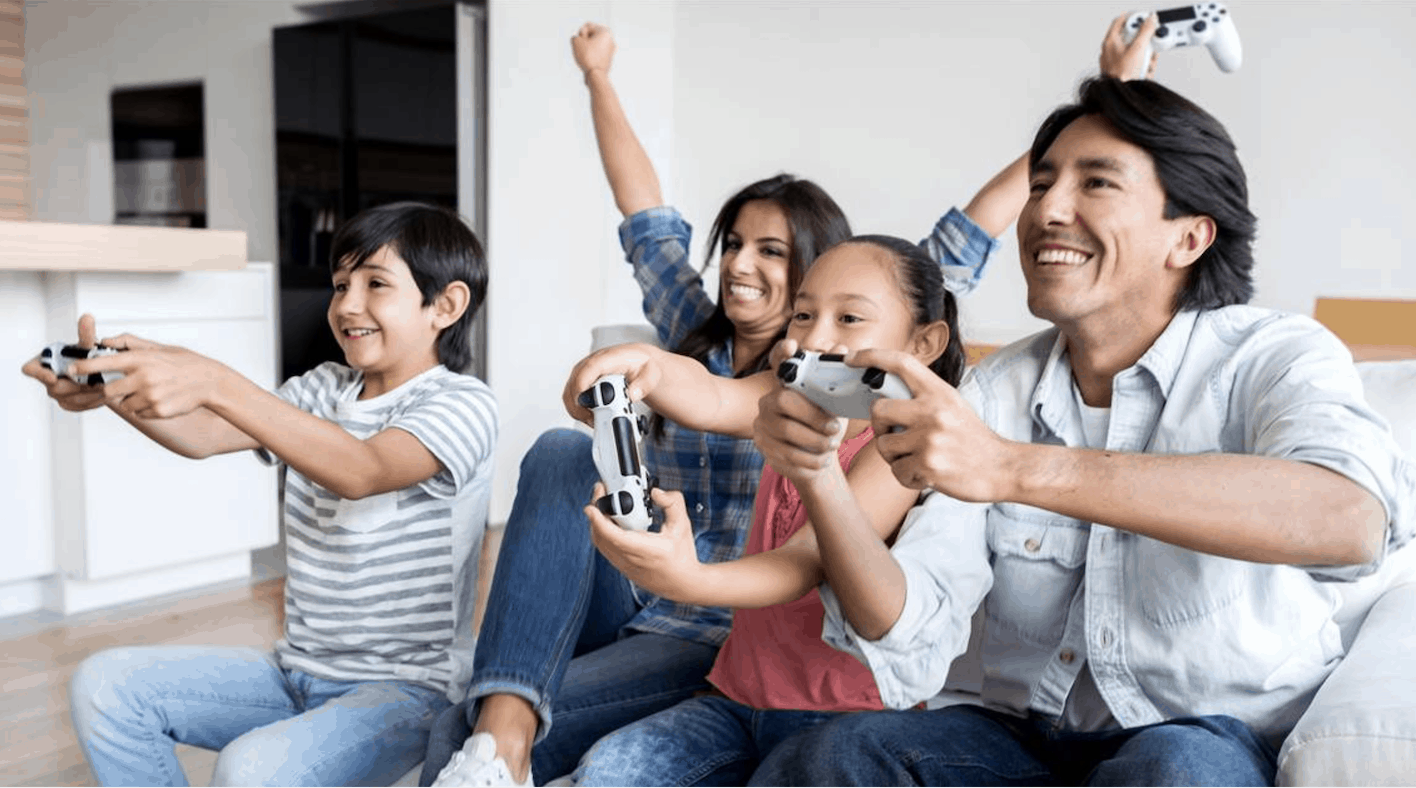 At the end of each school year, we ask the families to send us a summary of how their natural learning journey went. Families can summarize their year however they choose.  It can be a letter, a report, a list with course names and grades, or a multi-media presentation using pictures, videos and slides.

In this year-end report, Erika illustrates how a family can come together and share in their children’s passions.

Greetings, we want to share with you our past year.  If this year had a theme, it would most likely be gaming in all forms.

In any given week in 2019 Dean could have up to four opportunities to play Dungeons & Dragons:  the Adventure League at the local gaming store, the online program Outschool, an after-school-teen group, or running his own games in our dining room.  He studies each Game Master (GM) he plays with to learn their methods and style of storytelling and tests them out on his friends during his dining room sessions.  He definitely prefers playing in-person games over virtual games with a regular group of people.  The most sustained group is with the after-school-teen group that met at the local rec center, run by Roll Play Lead (RPL).  Jamie, the founder of RPL, sees the value in what role-play games like D&D can offer beyond just gaming for fun.  Understanding that more kids and teens these days live with anxiety or other forms of mental illness, she sees how well-suited role-play games can be used to help kids learn social skills and how the games can cater the story to meet the individual’s needs or challenges.

Dean and Vivienne both enjoy playing video games and both have their motives for getting what they want out of the games.  Dean is very interested in the gameplay and strategy, where as Vivienne gets swept up in the story and creatures she is working with or battling against.  Vivienne has become a rolodex of information on Pokemon and can’t seem to get enough of the unusual creatures and abilities.  The stories presented during the gameplay offer a uniquely catered story for Vivienne, which provides the desire and drive to improve her reading skills in order to follow along.  Vivienne is gaining a good sense of pre-planning and problem-solving skills in order to move forward in the story.  Whether she needs to have the correct Pokemon cued up ready to battle, or understand when it’s time to run from a fight, she is exercising her thinking ahead and planning for the future skills that are so important for daily life.

Dean, on the other hand, is more interested in strategy, cause and effect, and manipulating situations to meet his needs.  Dean doesn’t have a favorite game; rather, he relishes finding a new game, observing others’ playstyle to help create his own.  Dean also enjoys seeing new artistic styles each game developer puts into their content and has grown fond of the music each game or level in the game presents.  Online games offer many good things, such as strengthening your ability to work together and improve communication skills, but there are also some darker aspects that we find ourselves discussing with Dean.  Not all gamers are playing the game for the same reasons and Dean finds himself interacting with some not-so-nice teammates that are more interested in trying to get under other players’ skin or are just downright rude.  Maturity also plays a big part in how Dean deals with these types of people.  Rather than going on the defensive or offensive, Dean uses the situation as a sort of social experiment and attempts to change their outlook.  Despite other players’ mean or aggressive attitudes and playstyles, his findings have shown that when only responding to them positively, the rude player either leaves the game or ends up changing their tune.

Since Dean was seven years old, we’ve gone through waves between obsession and disinterest when it comes to Minecraft. Each Minecraft resurgence we try to find ways to play with friends without having to go through the trouble of starting our own server.  When COVID-19 struck, the kids missed their friends, so we knew it was the right time to figure out how to host our own server.  We dove into the daunting process of getting a server up and running and named it CoronaCraft.  We learned there is a lot we don’t know, but we got far enough to get a working server to host all the kids’ friends.  Besides giving the kids a virtual playground for the kids to stay connected, it has been an invaluable learning process for everyone in the family.  We play on the server along with the kids. Minecraft is one of the few video games that has captured our sustained interest. It’s great having a hobby the entire family participates in, especially during a lockdown! It proved to be a great distraction and escape from all the bad news outside the house. It took a while to master basic server hosting and we made mistakes along the way. The worst was a server crash or two, losing weeks of work, but we rebuilt and made it better the second time around, and we learned how to not let it happen again.  We helped the kids navigate setting boundaries with friends and have witnessed the amazing teamwork and building skills of all the kids on the server.

Dean has shown real maturity during this pandemic.  He has made a real effort to understand all he can regarding the facts about COVID-19 and he has shared that information with his friends as a way to stem fears his friends were sharing with him and he was able to help his friends make sense of the situation as only a peer could.  It was rough for Vivienne to have a birthday during lockdown, since we couldn’t throw the usual big party.  So we set up a secret amusement park on the server and asked all the kids to build rides in time for her birthday.  We held a virtual surprise birthday party for her, spending the evening trying out all the rides and eating cake. It was just as fun as a regular birthday.  Since we are not experts in the world of Minecraft we are asking for the kids’ help all the time; they light up with confidence when they are teaching us how to make things work.  Many of our dinnertime discussions covered Minecraft topics and we’ll spend many evenings watching Minecraft YouTubers for inspiration.  Dean has challenged himself with complicated Redstone creations; he says it’s his “big brain” moment when he has successfully executed his design.  When Vivienne asks to show us what she built, we are always impressed with how well her plan comes to life.  It’s in the world of Minecraft that we have seen both kids at their most self-directed and resourceful, not to mention their most giddy and cheerful, selves, while playing online with their friends.

Vivienne is inquisitive and curious, as always.  Her favorite way to explore the world is through interacting with others with her pop quizzes.  She inquires into others’ minds by playing question games, asking top favorites on any variety of things.  For example: what is your favorite animal with wings or what is your favorite animal from Australia? But she can get complex at times; “pick an animal’s superpower (like an Axolotl’s limb regeneration)”. Then the other person is to counter it with the superpower’s weakness (but it grows back too big).

Vivienne continued to attend as many nature classes at our local nature center as she could in 2019, although she is aging out of the classes they offer and they are the same ones she’s been to year after year.  The nature center has a fairy garden for kids to decorate and arrange logs, sticks and rocks for the fairies. We were inspired by this, so we created a fairy garden plot in our backyard for all the nature Vivienne brings home from hikes and outings. The garden gives the stones and sticks she collects a place to live and be creative with that isn’t in her bedroom.  In August 2019 the reptile store, where we get feeder insects for our lizard, gave us a complimentary hornworm to feed our pet bearded dragon, Sneezy.  Vivienne was struck by its bright aqua color and was sure Sneezy would choke on its large size.  Not knowing what else to do with this worm, we decided to take it in as a temporary pet and named it Bobbert.  We learned how to care for Bobbert so we could watch it grow and transform, which was absolutely fascinating to witness!  We found information on caring for hornworms from Carolina Scientific, a place where teachers can order these worms to bring into their science classrooms. In our case, life brought us this science lesson.

Art and creativity are ingrained into Vivienne and she uses her skills to provide art sculptures and costumes for her stuffed animals or clay sculptures, among other artistic endeavors.  Waiting around and long car rides are usually filled with drawing in one of her many drawing pads.  There are moments where Vivienne is so lost in her drawing that she doesn’t hear her name being called.  Getting lost in something so deeply that the rest of the world is “tuned out” demonstrates Vivienne’s passion and concentration for what she is working on.  Vivienne recently received a new computer and also a drawing pad.  The pad is similar to the devices Vivienne’s favorite YouTube personalities use to create the animations she enjoys so much and gets inspiration from.  This provides yet another medium for her to try and gain experience from.

The change in routine brought about by COVID-19 in some ways limited our opportunities to explore our world, but in other ways has stilled the waters of our life enough to see the things below the surface that had gone unaddressed since we began our homeschooling journey.  The year ahead is beginning like no other and we are looking forward to where the new twists and turns in our road will take us.