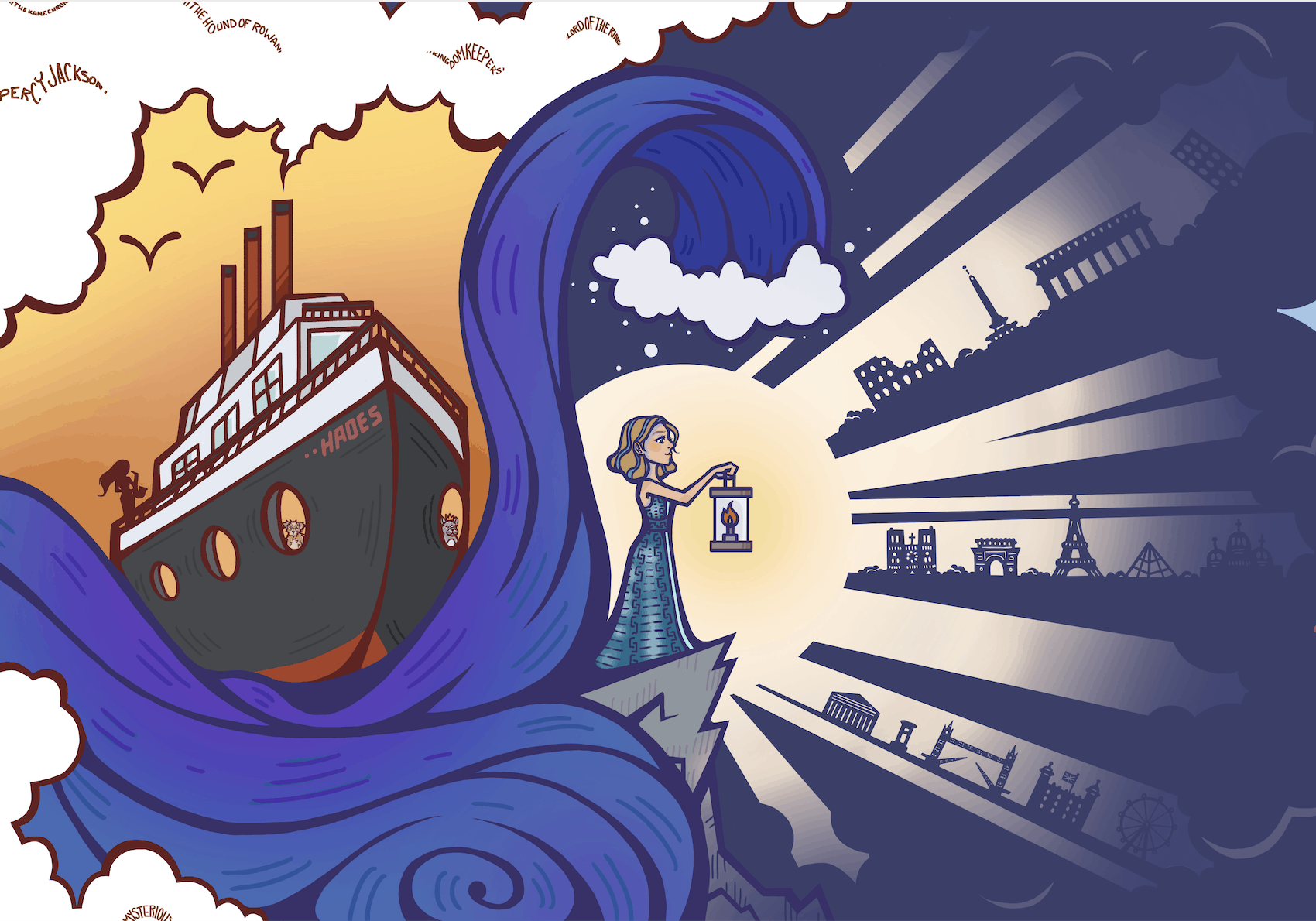 Josie is an incredible artist, who has spent her time as a West River Academy student developing all aspects of her creativity. In this art piece, she has intertwined her love of books with her educational journey in a way that tells her own life story as a novel. We congratulate Josie on her acceptance at Pratt Institute and look forward to hearing about the success of her future endeavors!

“I became a student at West River Academy when I was 10 years old. I’m now 18 and will be moving to New York City in the fall to study Art at Pratt Institute. This Graduation Project explores my time at West River Academy and is loosely based on the Greek myth of Persephone, as I chronicle my journey from childhood to womanhood.

It starts at the house we lived in when I was in elementary school. My favorite thing about that house was the giant palm tree in the front yard that looked like a huge pineapple. It made our incredibly suburban house just a little more fun. You’ll also see my cat, Lucy, who loved to be outside and who I miss very much. In the back is my family who I, obviously, had to include in this! They’ve supported me every step of the way on my journey to adulthood.

In fourth grade, I was a voracious reader, so I filled the cloud space with my favorite books from that period of time. I changed the name of the ship we went on, “Queen Mary 2” to “Hades”, to represent the chariot in which Hades took Persephone to the Underworld. There are so many different tellings of the Persephone myth, but my favorite version is the one where, instead of being kidnapped, Persephone chooses to go to the Underworld with Hades, seeking adventure.

When we started unschooling, so many of my friends said I’d never be able to get a job or go to college if I didn’t stay in school. We knew from the very first day that it was a good decision for our family, but still, we were bored in the suburbs. With our new freedom, we put everything we owned in storage and embarked on what ended up being an almost two-year world schooling adventure – really going into the unknown.

The second section depicts the Queen Mary 2 which was the start of our adventure. You’ll see my dog, “Toffee”, and the friend she made in the portholes. On deck, the friend I made, playing the blow-up saxophone I still have and treasure. We each had a backpack and just a few personal items, but we each needed one formal outfit for the QM2. It was my first “gown.”

This is the dress I wear as I step off the boat into my middle school years, lantern raised as my curiosity, to explore Europe’s treasures. Here, I illustrate the skylines of Rome, Paris and London. Most of my memories are captured on film. I got my first good camera on this trip and curated a highlight book of my photography; several images of which helped form my portfolio for Pratt. As you might imagine, photography became a life-long love through those years of regularly exploring something totally new.

Eventually, my brother and I missed playing sports and wanted to settle back in SoCal. This third panel of my scroll represents my high school years. During this time, I learned what I do want to do, and what I don’t want to do, represented by volleyball and working at our local ice cream place. Volleyball represents my discipline and drive: working with others, making friends, achieving goals and having a lot of fun doing it. That would be the Elysian Fields in my Persephone analogy, whereas the ice cream job was more like Tartarus. I thought it would be fun and full of smiles, but no one there really liked their job, the management was demeaning, and the customers were entitled.

Books were the biggest part of my elementary years, the focus of middle school was exploring the world, and high school was all about music. During high school, I was introduced to new genres of music that I’ve come to love. This passion is represented with the names of my favorite artists in the dark clouds between this section and the next. It was a valuable lesson in things not necessarily being what I expect, and how to shift when I’m in the wrong spot.

The final section of my scroll represents spring, my future, and the adult Persephone returning to the world anew. The gusts of wind are full of my interests and what I plan to pursue, but I imagine there will be some surprises along the way. Unschooling has kept me ready to notice and respond to what’s new, to carve my path and to make my way.”